Grządziel J., Gałązka A.,Fungal Biodiversity of the Most Common Types of Polish Soil in a Long-Term Microplot Experiment. Frontiers in Microbiology, 2019, 10.3389/fmicb.2019.00006

The aim of the study was to investigate fungal genetic diversity in eight different types of soil in a long-term microplot experiment founded in 1881 in Puławy, Poland. The experiment consists of eight plots (14 m2), each 1 m deep with concrete walls, filled with profiles of different soils. The soils represent the most common Polish soil types (Cambic Leptosol, Fluvic Cambisol, Gleyic Chernozem, Cambisol and Haplic Cambisol, two Brunic Arenosols and Haplic Luvisol). Each soil was characterized by different pH (from 4.0 to 7.5) and organic carbon content (4.5–21.3 g kg-1). The soil structure was not destroyed by compaction because the soils had always been cultivated by hand. The same plant species were always grown in all plots at the same time and the soils received the same fertilization. Moreover, the soils were always under the same weather conditions. Ascomycota was the most abundant phylum in all samples, ranging from 70 to 90% of total fungi. Some genera (Mortierella, Solicoccozyma, and Mycosphaerella) were found to be adapted to a wide range of pH. Acidic soils were dominated by Talaromyces, Cladophialophora, Devriesia, and Saitozyma, while good quality soils primarily consisted of Plectosphaerella, Tetracladium, and Mortierella. The study confirmed previous reports that pH has a decisive influence on soil fungal diversity, but also indicated the strong impact of soil type itself. These studies have launched a new cycle of research in these historical soil profiles. 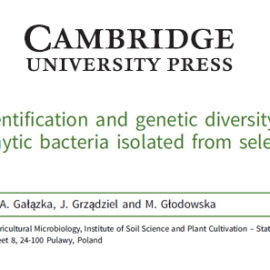