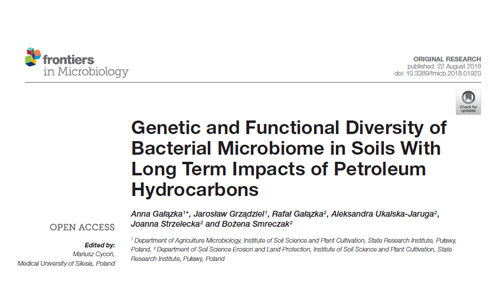 Soil contamination with petroleum, especially in the area of oil wells, is a serious environmental problem. Restoring soil subjected to long-term pollution to its original state is very difficult. Under such conditions, unique bacterial communities develop in the soil that are adapted to the contaminated conditions. Analysis of the structure and function of these microorganisms can be a source of valuable information with regard to bioremediation. The aim of this study was to evaluate structural and functional diversity of the bacterial communities in soils with long-term impacts from petroleum. Samples were taken from the three oldest oil wells at the Crude Oil Mine site in Węglówka, Poland; the oldest was established in 1888. They were collected at 2 distances: (1) within a radius of 0.5 m from the oil wells, representing soil strongly contaminated with petroleum; and (2) 3 m from the oil wells as the controls. The samples were analyzed by 16S rRNA sequencing and the community level physiological profiling (CLPP) method in order to better understand both the genetic and functional structure of soil collected from under oil wells. Significant differences were found in the soil samples with regard to bacterial communities. The soils taken within 0.5 m of the oil wells were characterized by the highest biodiversity indexes. Alphaproteobacteria,  Betaproteobacteria,  Gammaproteobacteria were strongly correlated with biological activity in these soils. Families of Alphaproteobacteria were also dominant, including: Bradyrhizobiaceae, Rhizobiaceae, Rhodobacteraceae, Acetobacteraceae, Hyphomicrobiaceae, and Sphingomonadaceae. The study showed that the long term contamination of soil changes bacterial communities and their metabolic activity. Even so, natural bioremediation leads to the formation of specific groups of bacteria that actively grow at the site of contamination in the soil. 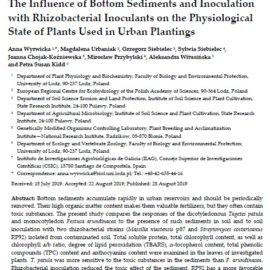